If only we had thought take a photo! But, it wasn’t a date when it began. We were just getting together to say hello. I just happened to be flying in to Seattle for a few hours for work and asked Jenny if she’d want to get together for lunch.

The screenshot is of the details of Jenny’s flight for which she got called to work (after lunch, fortunately) and which took off just before my own departure.  We, for a short while, caught each other’s voices on several radio frequencies as we both simultaneously flew on similar paths southward from SeaTac, Jenny to Reno and I to Sacramento (Davis), until we diverged far enough apart that we were no longer in the same sectors. 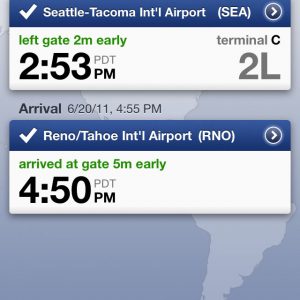